Some news about Slide Effect 2

It is time to give you some news about ongoing work here, at Slide Effect headquarters (well, my office on my basement in fact). I published some months ago a roadmap regarding Slide Effect new versions and, as you may see, it was just plainly wrong and I changed my plans about 10 times since this roadmap. That’s joy of indy software development, I guess.

As you may have see, instead of adding features to Slide Effect 1, I decided to change some core features and start Slide Effect 2.

I work on Slide Effect 2 since a lot of time now, and even if nothing is visible, I did a hell lot of work these last several months. So here is some highlights of this new version coming soon. 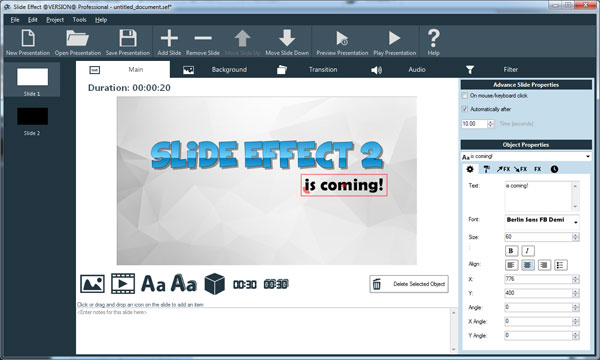 The first thing you will notice is a change in the skin of the software. I created a new flat look that doen’t look like in 1995 anymore. I also changed a lot of interface details to make it more intuitive and more efficient for day to day tasks.

As Slide Effect 2 won’t be compatible with Slide Effect 1, I also removed features that was not very useful (some background effects), not very nice or not working correctly.

One big thing I removed in the Professional edition is the Powerpoint Import/Export. I know it is a useful feature, but it was not working well and as it needs Powerpoint installed on the same machine, it leads to a lot of bugs. I may re-introduce it later in a better way (no need to install Powerpoint, better import/export procedure).

The player has been also completely rewritten and now use OpenGL instead of DirectX. It means a Mac OSX is now possible… But I will take the time to have a slick Windows version before working on the Mac version.

One of the worst thing of Slide Effect 1 was the fact all effects/transitions/background effects were directly integrated in the software. It means I was the only person able to add or modify effects on the software. This was a huge mistake, as I am sure there are plenty of people better than me to create outstanding effects. 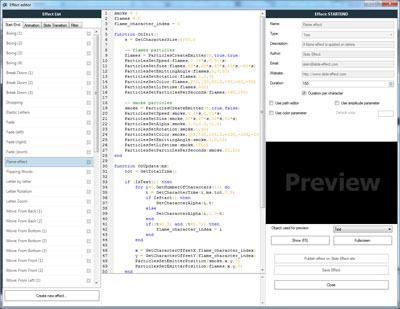 That’s why the core feature of Slide Effect 2 is the ability to create and share your own effects/transitions/backgrounds. The Professional edition will feature an editor to create your own effects! Experienced users will be able to modify or create any effect in the software, then share it on our website with other users.

To make this possible, I will also rework completely the website to be able to check if new effects, transitions or filters are available, possibly give them a rate and install it on Slide Effect in one click.

You will be able to design your own:

Backgrounds: Plain color, image or movie backgrounds (old complex backgrounds are removed on Slide Effect 2).
Transitions: You will be able to create never seen before transitions with a lot of new features.
Effects: You will be able to create start/end/anim effects for any object on the slide.
Filters: Filters are something new introduced in SE2. It is an effect applied to all the slide. 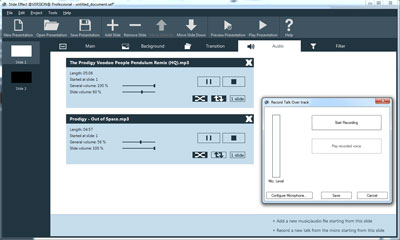 You can also set volumes for each tracks on every slides. You can also “pause” a track for a bunch of slides and “unpause” it later. 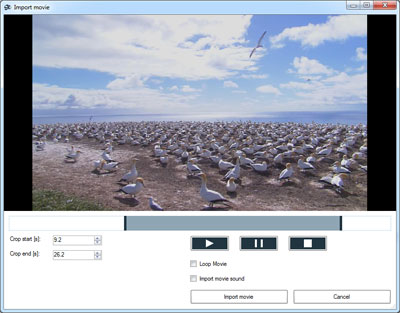 Video import will let you choose the start and end time of importation and will crop the movie to the interesting part. No need to use an external video editor like before.

The video export has been also reworked and is a lot easier to use. You will also be able to create 4k movie for your brand new TV set. 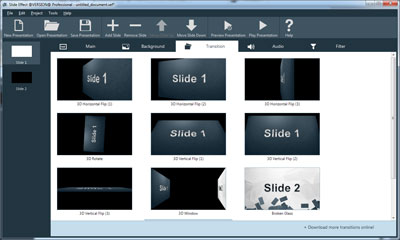 Every tabs of Slide Effect have been reworked. You will be able to share or download new backgrounds in a few mouse clicks.

You will also be able to preview any effect directly on the software without previewing the presentation (for instance, transitions are played when you mouse over the transition thumbnail).

Filters have been added and are a good way to give your presentation a unique look (like an old movie). 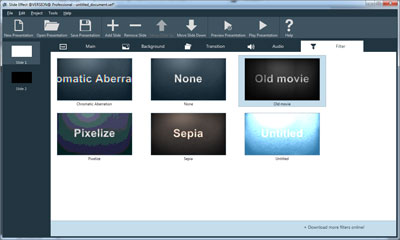 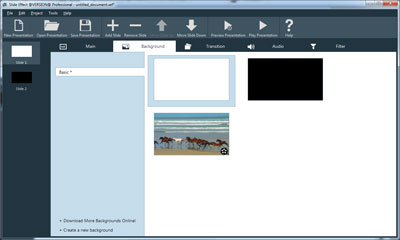 Slide Effect 2 will feature a Standard and a Professional version, as usual. But the trial version will be changed to a free version with less restriction to make it usable (no slide limitation anymore) for anybody looking for an efficient free software.

Do have I to purchase again once SE2 is released?

No, SE2 will be released as a regular upgrade of SE1. If you are within your “1 year of free upgrades”, you will be able to update for free.

I really want to deliver a rock solid software, so the release is not for now. All core features are now integrated, but I have still some work to polish the software.

I also have to work on the website to create all the sharing and community tools, it takes a lot of time and I am alone at this task.

So I decided I won’t give a fixed release date, because it is important to have a solid ground to make SE2 as successful as possible.

I will try to publish more news of my work in the future.

Thanks a lot to every customers for your support, your feedback and your patience!